PLEASE CLICK BELOW TO READ THE ENTIRE LATEST SPOTLIGHT: 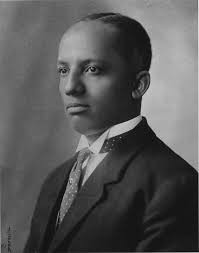 “What we need is not a history of selected races or nations, but the history of the world void of national bias, race hate, and religious prejudice.”

“The mere imparting of information is not education. ” ― Dr. Carter G. Woodson

I am honored to begin this month by taking a moment to celebrate the life of Dr. Carter G. Woodson, the Father of Black History Month. Dr. Carter G. Woodson was the second Black American to receive a PhD in history from Harvard—following W.E.B. Du Bois by a few years.The journey of his efforts to celebrate Black history began in Chicago in the Summer of 1912 at a celebration commemorating the fiftieth anniversary of emancipation. The celebration of the deconstruction of slavery acknowledged the accomplishments of African Americans. The turn out was so great that it inspired him to come together with fellow scholars and activist to create what eventually became Black History Month. You can read a historical summary here. In 1926, Dr. Carter G. Woodson founded the first Negro History Week, timed to coincide with Abraham Lincoln’s and Fredrick Douglass’s birthdays.

To Dr. Carter G. Woodson, the black experience was too important simply to be left to a small group of academics. Dr. Woodson believed that his role was to use Black history and culture as a weapon in the struggle for racial uplift. He wanted this to be a Black History Year to consistently teach the historical facts and truths about the contributions and accomplishments of Black Americans within our American History. "Dr. Woodson believed that history was made by the people, not simply or primarily by great men. He envisioned that the study and celebration of the Negro... should focus on the countless Black men and women who had contributed to the advance of human civilization." It wasn’t until 1976 that President Ford extended the observation to a full month of honoring the contributions of Black Americans.

Click here to read: Black History Month is Here, But We Need More than a Celebration by Dr. Kyla Johnson-Trammell Superintendent

Due to the shelter in place the Tuesday RHS TECH SUPPLY PICKUP is canceled until further notice. if you need a Chromebook, please Contact our TECH EXPERT: rebecca.weissman@ousd.org,

cynthia.bagby@ousd.org if you need to make arrangements.